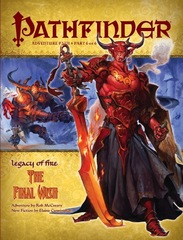 Fear and ruin grip the land as the long-imprisoned army of a mad genie renews its ancient war. From the streets of the exotic city of Katapesh to the shadow of cursed Pale Mountain, this horde of immortal warriors leaves only fire and ruin in its wake. Empowered and perverted by the granting of wild wishes, this seemingly invincible legion strangles the realm in its fearful grasp as an obsessed general stokes the embers of an age-old devastation. Can the PCs save Katapesh from both a burning tyrant and the resurrection of a living apocalypse? Find out in this, the climax of the Legacy of Fire Adventure Path! This volume of Pathfinder Adventure Path includes: "The Final Wish," an adventure for 14th-level characters, by Rob McCreary, Accounts of the Spawn of Rovagug, the titanic spawn of the god of destruction, by Clinton Boomer, The magic of genies and insights into the power of wishes, by Wolfgang Baur, Pathfinder Channa Ti's last-ditch efforts to prevent a dark god from entering the world, in a climactic Pathfinder's Journal by New York Times bestselling author Elaine Cunningham, Seven new monsters by Adam Daigle, Rob McCreary, and F. Wesley Schneider. For characters of 14th to 15th level.